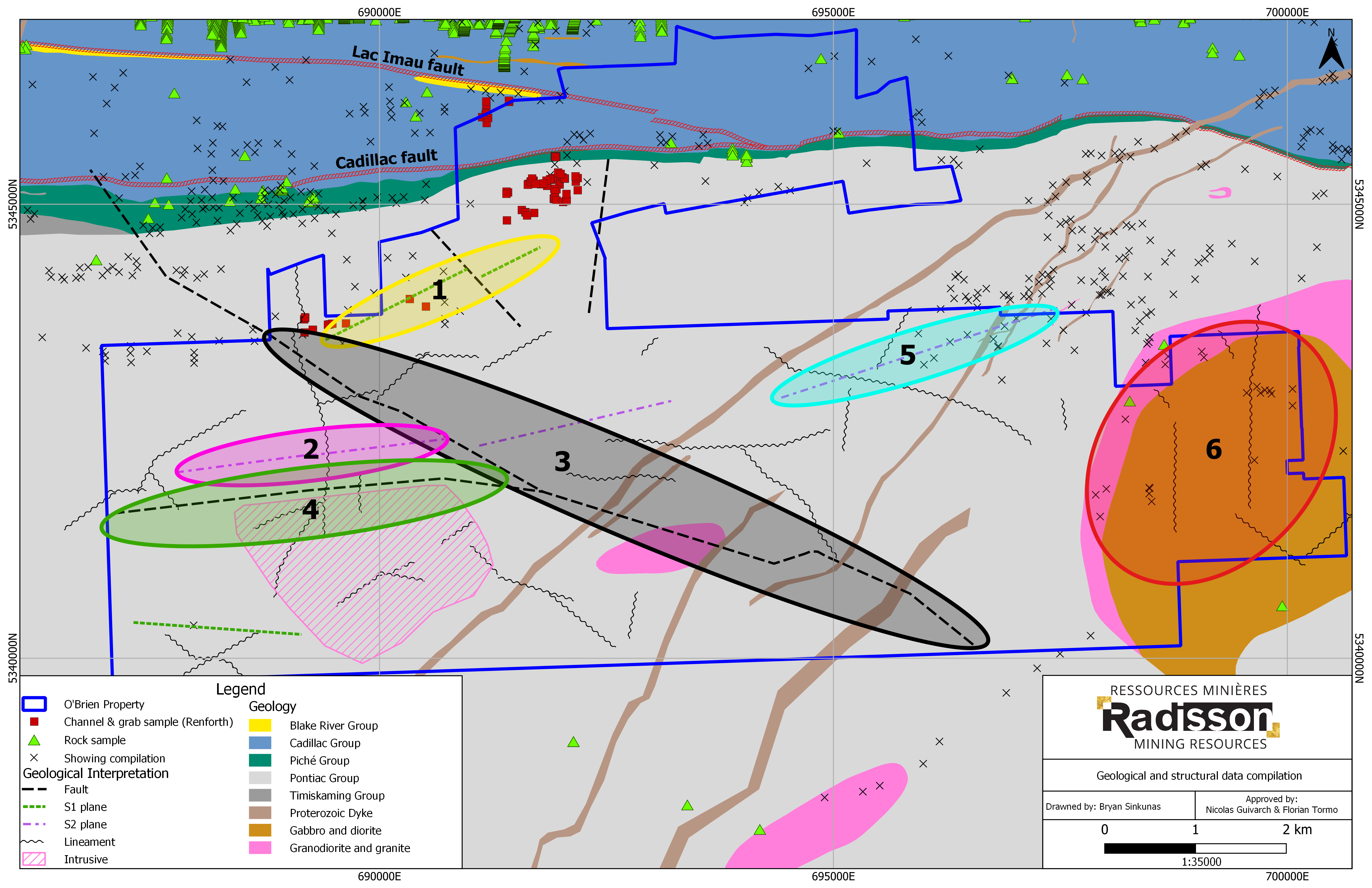 ROUYN-NORANDA, Quebec, June 14, 2022 (GLOBE NEWSWIRE) — Radisson Mining Resources Inc. (TSX-V: RDS, OTC: RMRDF): (“Radisson” or the “Company”) is pleased to announce that it has commenced a field program focusing on the 54 km2 area comprising claims south of the prolific Larder-Lake Cadillac Fault. The program was designed following a compilation and interpretation of available historical data, with the aim of evaluating opportunities showing strong discovery potential in the southern sector of the O’Brien gold project.

“Since the acquisition and integration of the New Alger property into the O’Brien project in 2020, our team has been focused on executing the 130,000m drill program at the O’Brien gold project. The main objective of the drilling program was to increase the current resources and to test new targets in well-known areas near the former O’Brien mine. Although the impressive results received so far suggest a very successful drill program, it should be noted that the program focused on an area covering less than 10% of our extensive 5,800ha land package. The significant land package south of Cadillac Break has been a key driver of our interest in the New Alger property, and a review of available data has confirmed our view that the area holds enormous potential for transformational discoveries. Despite its proximity to the Larder-Lake-Cadillac fault, limited work has been carried out in the southern sector of the O’Brien project. Following a compilation of historical data, our team was able to establish the presence of geological elements showing a strong potential for discovery. As we await results from approximately 25,000m of drilling, our team is excited to begin a major field program that may unlock the underlying potential in the southern portion of the O’Brien gold project. Commented Rahul Paul, President and CEO.

The Bousquet-Cadillac mining camp has produced over 21,000,000 ounces of gold over the past 100 years. In August 2020, the Company acquired the New Alger property to integrate two properties comprising over 5.2 km of prospective land along the Larder-Lake-Cadillac Fault (“CLLFZ”). The project is home to three historic mines, including the former O’Brien mine, considered the highest-grade gold producer in Quebec during its production (1,197,147 metric tonnes at 15.25 g/t Au for 587,121 ounces of gold from 1926 to 1957; Kenneth Williamson 3DGeo-Solution, July 2019).

The New Alger property also covers 54 km2 of prospective lands located south of the Larder-Lake-Cadillac Fault in the Pontiac Sediment Group. Along the CLLFZ, these sediments are known to host gold deposits, particularly in the Malartic mining camp where some deposits are spatially associated with mafic and felsic syntectonic intrusions near the CLLFZ.

Compilation, interpretation and work in progress

Following the compilation of geological and geophysical data made available by previous work carried out there and on SIGEOM (geophysical and geochemical survey, grab and channel sampling), Radisson was able to identify several favorable sectors with the potential to host gold mineralization, these sectors should be a priority during the first weeks of the program. These areas were established based on the understanding of the distribution of gold found in the gold deposits of the Cadillac mining camp, in particular the Thompson Cadillac and O’Brien mines. The figure below presents a summary of the potential geological traps and favorable targets interpreted to date in the southern part of the O’Brien project: 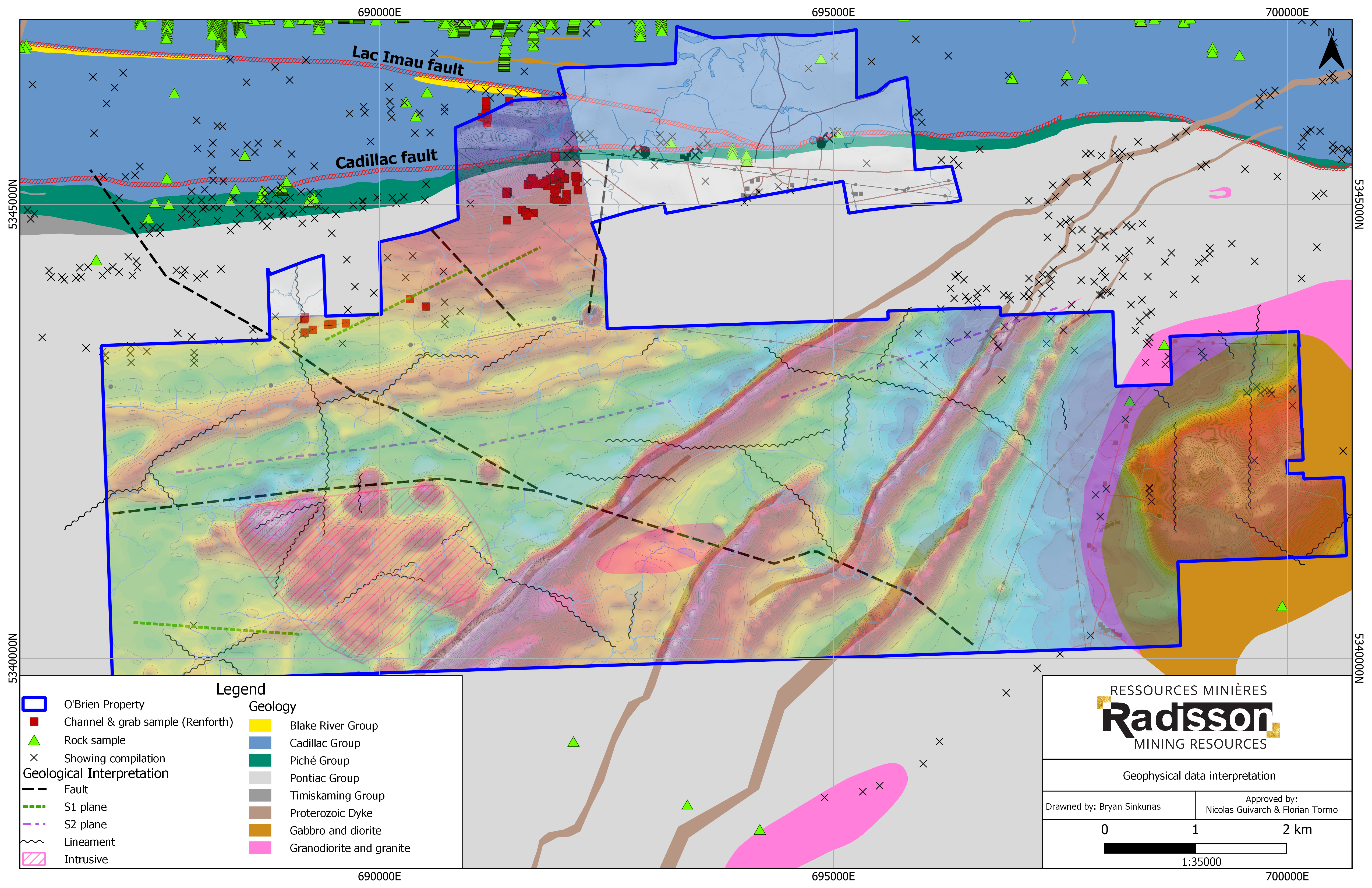 During the summer of 2022, the team will cross the entire property every 400 meters representing approximately 200 linear km with the aim of locating, mapping and analyzing the prospective showings observed. Lines are planned on 22 sectors bounded by streams and watercourses. Compilation of historical data combined with digital topographic data, satellite images, surface geological maps and recent field reconnaissance have confirmed the presence of multiple showings on the property, in particular due to limited overburden in most sectors (0 to 5 meters), forestry work undertaken previously and the discovery of outcrops in the region and the development of access roads.

The Company believes that the current infrastructure, including provincial highway 117, other existing access roads/trails, the infrastructure of the O’Brien project and the proximity of the sites to the municipality of Cadillac will allow the team to undertake an optimal and effective program. 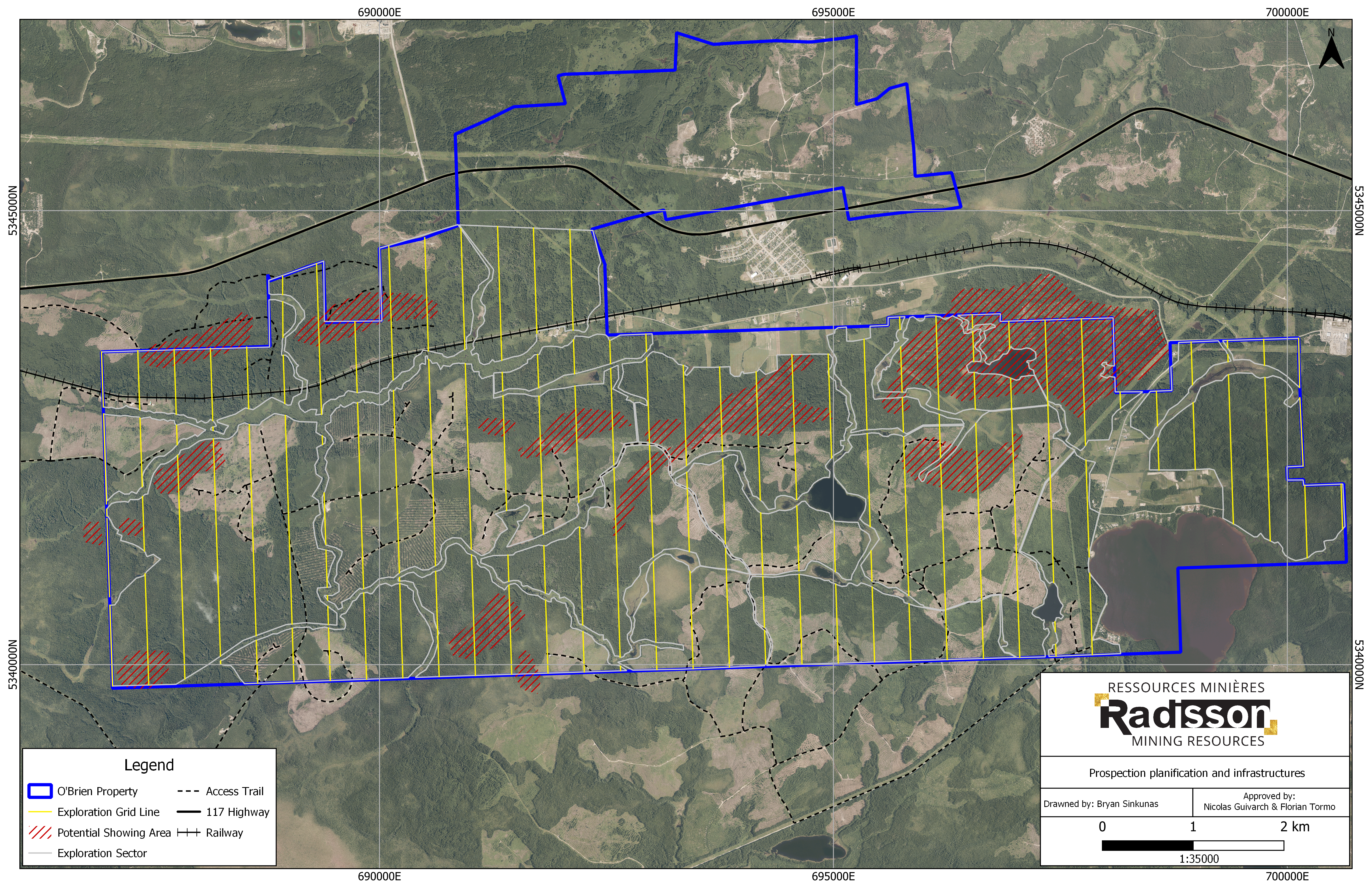 The main objective of the recently started field program is to establish high priority exploration targets with the potential to discover a gold deposit demonstrating similar characteristics to the former O’Brien mine and other mines in the mining camp. of Bousquet-Cadillac. The favorable areas highlighted above seem to demonstrate the potential for this type of mineralization. It is known that the gold mineralization of the Bousquet-Cadillac mining camp is mainly subdivided into two types:

These veins are generally parallel to the main S1 schistosity or at a slight angle with it (10 to 15 degrees). Arsenopyrite and pyrite are the predominant sulphides in many deposits along the CLLFZ. In addition, notably at the O’Brien project, gold zones are located at the contact between the competent units. A close relationship between mineralized zones and asymmetric “Z-shape” folding is also noted in many deposits. Finally, numerous gold enrichments have been recognized locally along late and brittle faults oriented NW and/or NE.

Thus, the team will mainly explore showings with the following characteristics in order to establish priority exploration targets:

Eddy Canova, B.Sc., geo. OGQ, of GeoConsul Canova Inc., is the Qualified Person under the requirements of NI 43-101. Eddy Canova has reviewed and approved the technical disclosure in this press release.

Radisson is a gold exploration company focused on its 100% owned O’Brien project, located in the Bousquet-Cadillac mining camp along the famous Larder-Lake-Cadillac fault in Abitibi, Quebec. The Bousquet-Cadillac mining camp has produced over 21,000,000 ounces of gold over the past 100 years. The project hosts the former O’Brien mine, considered the highest-grade gold producer in Quebec during its production (1,197,147 metric tonnes at 15.25 g/t Au for 587,121 ounces of gold from 1926 to 1957; Kenneth Williamson 3DGeo-Solution, July 2019).

On behalf of the Board of Directors

Hubert Parent-Bouchard
Financial director
819-763-9969
This email address is protected from spam. You need JavaScript enabled to view it.

All statements, other than statements of historical facts, contained in this press release, including, but not limited to, those relating to the intended use of the proceeds of the Offering, the development of the O’Brien project and, generally, the statement “About Radisson Mining Resources Inc.” paragraph which essentially describes the Company’s outlook, constitute “forward-looking information” or “forward-looking statements” within the meaning of applicable securities laws. , and are based on expectations, estimates and projections at the time of this press release. Forward-looking statements are necessarily based on a number of estimates and assumptions which, although considered reasonable by the Company at the time of such statements, are inherently subject to significant business, economic and competitive uncertainties and contingencies. These estimates and assumptions may prove to be incorrect. Many of these uncertainties and contingencies may directly or indirectly affect, and could cause, actual results to differ materially from those expressed or implied in the forward-looking statements and future events could differ materially from those anticipated in such statements. A description of the assumptions used to prepare this forward-looking information and a description of the risk factors that could cause actual results to differ materially from the forward-looking information can be found in Radisson’s disclosure documents on the SEDAR website at ‘address www.sedar.com.