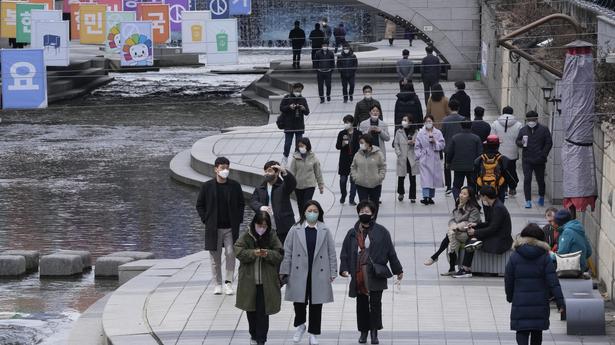 South Korea will no longer require people to show proof of vaccination or negative tests to enter any indoor space from March 1, removing a key preventative measure during a developmental omicron surge rapidly increasing hospitalizations and deaths.

The Health Ministry announcement on Feb. 28 came as the country set another one-day record for COVID-19 deaths with 114, beating the previous record of 112 set on Saturday. More than 710 COVID-19 patients were in critical or serious conditions, up from 200 to 300 in mid-February, while nearly half of the country’s intensive care units designated for COVID-19 were occupied.

Park Hyang, a senior health ministry official, said canceling the ‘anti-epidemic pass’ would free up more health workers to help monitor nearly 800,000 virus-infected patients with symptoms. mild or moderate who have been asked to self-isolate at home to save space in the hospital.

About 2,50,000 people a day over the past week have received free rapid antigen tests at public health offices and testing stations. According to the ministry, about half of them came for evidence of 24-hour negative tests.

Since December, adults have been required to show their vaccination status via smartphone apps or present proof of negative tests to enter potentially crowded spaces such as restaurants, cafes, gyms and karaoke rooms.

But the policy had already been challenged by local court rulings in cities like Daegu, where a district judge last week ruled the measures excessive for people in their 50s and under. He said the government has shifted its anti-virus campaign to high-risk groups, including people in their 60s or older and those with pre-existing health conditions.

“We had considered the need to focus our limited public health resources on screening high-risk groups and managing those who already tested positive. … There had also been regional confusion as a result of court rulings,” Park said during a briefing.

She said authorities were not considering reintroducing the epidemic pass unless the pandemic undergoes another major change, such as the emergence of a new variant of coronavirus.

“Although the epidemic pass has been discontinued, we ask people in their 60s or older and those who have not been vaccinated to exercise even more caution than before,” Park added, saying the omicron would be potentially dangerous for them.

So far, Omicron seemed less likely to cause serious illness or death than the delta strain that hit the country hard in December and early January. But hospitalizations and deaths are beginning to rise amid a larger-scale outbreak that is stretching exhausted healthcare and public sector workers.

The country has been forced to reshape its response to the pandemic in a way that effectively tolerates the spread of the virus among the wider population while focusing medical resources to protect priority groups.

Authorities quickly expanded home treatments while significantly easing quarantine restrictions. The country has also reshaped its testing policy around rapid antigen test kits, despite concerns about their accuracy and propensity for false negative results, to reserve lab tests mainly for priority groups. Many South Koreans are wary of the bend but not break approach, as the country continues to report some of the highest daily infection numbers in the world, including 1,39,626 on Monday.

There appears to be limited political capacity to enforce social distancing ahead of the March 9 presidential election, given people’s fatigue and frustration with the prolonged restrictions and pressure on service sector businesses.

Despite the growing outbreak, authorities earlier this month extended restaurant dine-in hours by one hour to 10 p.m., though they have so far maintained a six-person limit for private social gatherings. . Over 86% of the country’s population of over 51 million are fully vaccinated and about 61% have received boosters.