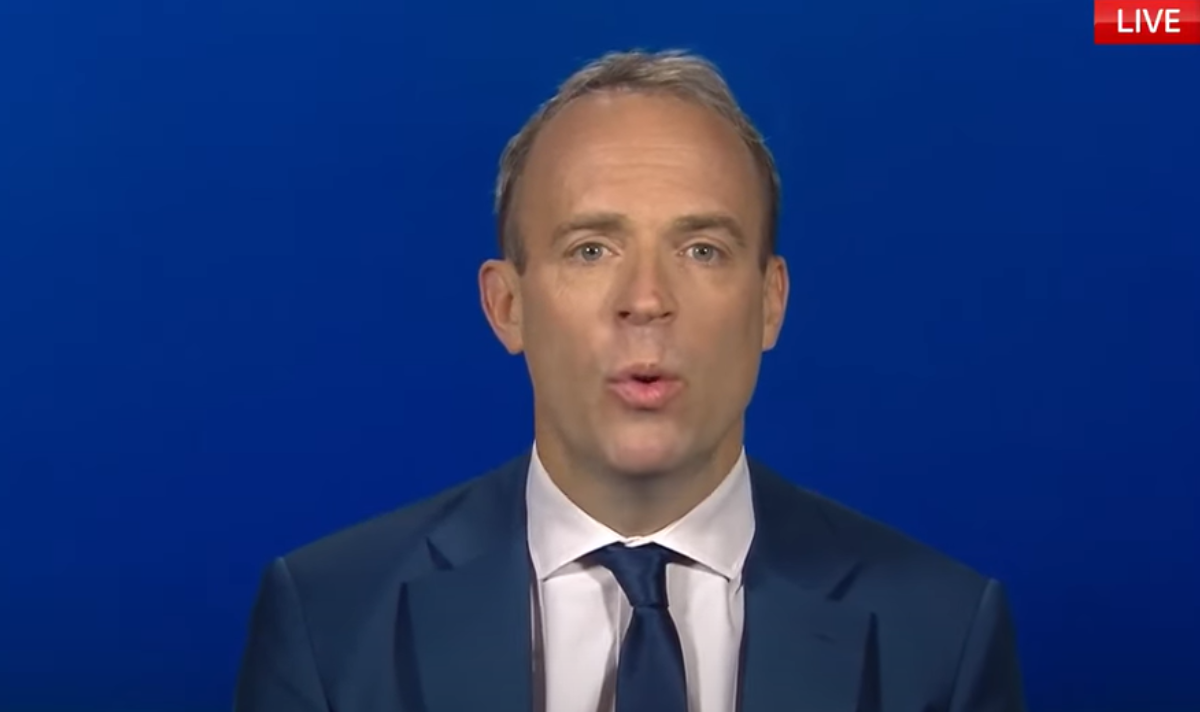 Mr Raab encouraged support for the PM despite many Tory MPs still calling for Mr Johnson to step down. The Prime Minister managed to survive a 59% no-confidence vote yesterday as a number of Tory MPs delivered letters of no-confidence to the 1922 Committee. But his bid to defend Mr Johnson was met with backlash a challenge as BBC radio host Nick Robinson wondered if he would change his stance on the Prime Minister’s resignation as he put the frontbench in place on his party’s main policies.

Mr Robinson referred to the new windfall tax and the rise in National Insurance prices.

“I’m telling you very, very nicely, you’re not a tax-cutting Conservative party and for the reasons, you explained there maybe good good reasons not to be.”

JUST IN: Can Labor call a vote of no confidence? Keir rages as Boris wins ‘Unfit for office!’

The Deputy Prime Minister said: ‘Because I’m trying to make a point, what if I could just complete the picture and I will do it very quickly.

“First of all, the emergency, we’ve dealt with that emergency in a way that I think a lot of people attribute to the government, and you think 40 million jobs is no small feat.

“The reality is that you could come out of the emergency, of course we want to talk about physical financial responsibility and reducing the tax burden. But especially with the challenge of the cost of living, so reducing taxes on insurance National in July is a critical first step.

“But we are a government that will deal with those two things, the emergency as usual and then the pressures on ordinary families.”

READ MORE: ‘Put it behind us!’ Boris vows to unite Tory party after narrowly seeing rebels

Mr Robinson said: ‘Would you be prepared to tell your boss the Prime Minister, not now maybe, but if you think circumstances change, I’m sorry, boss, you have to go?’

Mr Rabb insisted: ‘Listen, I will always put the good of the country first and have resigned from the cabinet before when I thought it was at stake.

“I don’t think that’s the issue now, I think passionately and unflinchingly what we need to do is get back to the front and the way you do that is the positive agenda and support for the Premier minister, because precisely… Tobias knows.”

The BBC presenter added: ‘Are you confident in fact, are you convinced that Boris Johson is putting the party, more importantly the country, ahead of his own interests?

Mr Rabb said: ‘Look at all the criticism he gets, I don’t know anyone as passionate and as patriotic about this country as the Prime Minister.

DO NOT MISS :
Unable to topple Boris, unsure of what to do next The Tories in shambles [COMMENT]
Boris vows to unite Tory party after narrowly seeing rebels [REACTION]
Former Tory leader calls on Boris to step down after vote of confidence [UPDATE]

“We won the biggest share of the vote since 1979 in 2019 and I’m very confident if we focus on this positive agenda we can do even better next time around.”

Despite Mr Rabb’s support for the Prime Minister, some other Tory MPs do not share the same sentiment.

Julian Lewis, chairman of Parliament’s Intelligence and Security Committee, said Mr Johnson had “an aversion to scrutiny, bordering on contempt of the House of Commons”.

Mr Lewis added: “The Prime Minister’s record since 2019 has been a mix of achievement and mishap.

“His difficulties stem in large part from the belief that he and his privileged friends can ignore the rules, which others must follow. This weakens confidence in the integrity of Parliament.

“He has an aversion to scrutiny that borders on the contempt of the House of Commons. Impropriety at the top of government is impossible to defend, especially when it is habitual.”

One of the most vocal politicians calling for Mr Johnson’s resignation as Prime Minister is Westminster SNP leader Ian Blackford, who has been pushing for his resignation since the Partygate scandal broke.

Mr Blackford said: “He may try to argue, as he did, that he won the vote, but it is a moral defeat for the Prime Minister.

“You have the situation where all the opposition parties and now 140 Tory MPs want this prime minister to go, he won’t be able to run away.”

Mr Blackford added: ‘Whether he leaves today or whether it’s a few months from now, he’s a dead man walking, he’s a man who will pay the price for his behaviour.’